Welcome to My World

A glimpse inside the life and mind of Mike B. 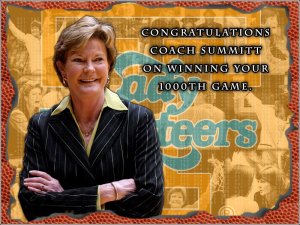 Last night was an historic night as Pat Summitt, head coach of the UT Lady Vols, became the first Division I basketball coach – men’s or women’s – to win 1000 career games! The Lady Vols impressively beat Georgia 73-43 at Thompson-Boling Arena in Knoxville.
The Lady Vols were only up by 8 at halftime, but quickly took a double-digit lead with Glory Johnson’s first goal of the second half. From there they never looked back. Johnson finished the night with a career high 20 points. Alex Fuller had 13, Kelley Cain had 12, and Angie Bjorklund added 11. It was a very impressive performance by the young team.
Upon completion of the game the celebration began as Pat Summitt was doused with a bucket of confetti. Awards were presented, then Coach Summitt had the chance to speak. The first words she spoke were, “Wow, this may be a little hard for me”. She was very complimentary of players and assistants over the years. Below are a few of the things she said that really stood out to me.
“It’s a time to reflect on a number of things, the administration saying yes to women’s basketball and giving us an opportunity to play on the biggest stage in the women’s game. I appreciate that.”
“I feel like I’ve been extremely blessed, and I thank God for the many opportunities I’ve had to be your coach and work with these young ladies, and so I want to thank all of you. I want to thank every person who’s been a part of my staff. … They gave their absolute best.”
Congratulations to Pat Summitt on 1000 wins! I know there will be many more to come.

There was an error retrieving images from Instagram. An attempt will be remade in a few minutes.